We the Crowd? Constitutional Reform 2.0

Posted on September 19, 2011 by serendipolis

What do the spring in Iceland and in Southern Mediterranean latitudes have in common? Maybe in Iceland it comes slowly later in the solstice, as stated in Ron Bayes’ poem, but in both latitudes it has certainly keened the spirits by bringing a new light on politics and civic participation. Initiatives for constitutional reform have simultaneously blossomed in Iceland, Morocco, and Egypt, and Tunisia is catching up too. And the crowds have their say in them all.

In the aftermath of its financial meltdown, Iceland took the lead by passing a new Constitutional Act that provided for the random selection of 1,000 citizens to set the Icelandic National Forum 2010. The Forum facilitated the deliberation on constitutional values and issued recommendations for the new Constitution. Taking stock of these conclusions, the Constitutional Council—a publicly elected Assembly of 25 citizens—started to work on a constitutional draft and set an official website to publish updates, minutes, and live stream the deliberation sessions. The Council also subscribed to Facebook, Twitter, YouTube, and Flickr to channel civic participation. Icelanders submitted around 1,600 propositions and comments on the Council’s website and the Facebook page had more than 4,600 “likes” (the total population is 320,000 people).

Morocco and Egypt immediately followed. Tarik Nesh-Nash, a software engineer from Tangier, and his colleague Mehdi Slaoui Andaloussi created Reforme.ma, a platform where people could vote the articles of the constitutional draft, make comments, and share them. In a few weeks, Tarik and Mehdi collected more than 10,000 comments, out of 200,000 visitors, and presented them to the National Commission of the Constitutional Revision that had solicited them. As I blog these lines Tarik and his colleagues in Morocco keep themselves busy by setting Marsad.ma, a platform to crowdsource the observation of the November 2011 election. 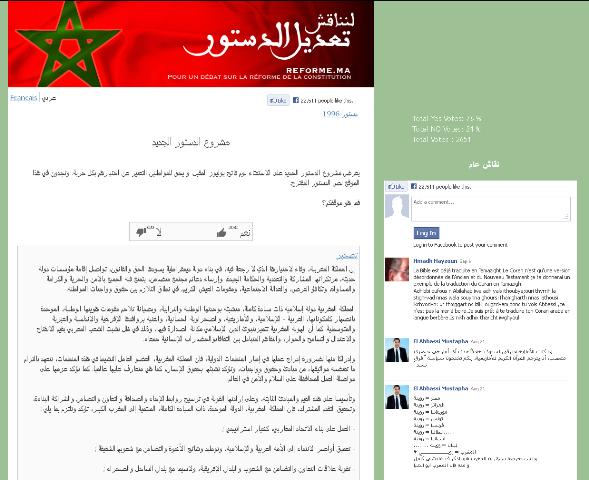 In Egypt, the opposition leader Mohamed El-Baradei convened a consortium of NGOs to create Wathiqah, a crowdsourcing platform for the discussion of 17 fundamental human rights principles that would inspire the new Egyptian constitution. Wathiqah received expert and technical support from Cloud to Street, a Stanford based project that collaborates with Egyptian democratic activists. In the week of campaign, Wathiqah generated some 6,300 visits and 18,000 page views. Another constitutional venture is dostormisr.com, which follows the model of the Moroccan Reforme.ma to crowdsource public inputs on Egypt’s constitution.

The most recent initiative is Afktar Mostakella in Tunisia. Afkar has been recently founded by a group of Tunisian activists keen to support independent candidates for the election of the Constituent Assembly in October 2011. While not discussing any constitutional text, the website allows citizens to post ideas that independent candidates may support in the election campaign or feed the future constitutional debate.

To what extent the footprint of the crowds in this new generation of Constitutions will be traceable? Crowdsourcing platforms combined with social media have certainly provided unprecedented outlets for civic participation. Thousands of visits, votes, comments, and proposals contribute to raise political awareness and engage citizens to be part of those unique moments that shape the future of a country. And digital democracy may come as an essential component.

But the crowdsourced approach doesn’t come without a number of criticisms: unclear value proposition, relatively low levels of participation, lack of representativeness, over-simplification, or absence of metrics about the real impact on the final outcome (see Mary C. Joyce post here). Is Joyce right when she avers that “you don’t write a constitution online”? If you have no clear strategy, nor well-defined objectives or methods, or have failed to patiently weave an horizontal web of both offline and online constituencies, you probably won’t. But the examples above didn’t intend that either. Most of them have stepped to the fore fueled with the energy and enthusiasm of putting an end to decades of authoritarian rule. They learn by doing, and we all learn by their doing.

1 Response to We the Crowd? Constitutional Reform 2.0